Hola! We’re back from sunny Spain.

Oh, that was a lovely holiday. A week of glorious sunshine in Espana, in a huge villa on the La Manga resort in Murcia, with great friends, a private pool full of inflatables and laughing children, and a fridge full of San Miguel and Fanta Limon.

We ate, we drank plenty of Rioja, we laughed, we chilled out, we forgot about running our lives by the clock. And we all had plenty of playtime: the three older kiddies were in kids’ club for five mornings and loved every second of it, from crazy golf and dance competitions to colouring and making masks; the menfolk played a round on each of La Manga’s three stunning golf courses, (resulting in comedy ‘golf tans’ with very brown forearms and very pasty beer bellies) and me and my beautiful, tall, brown, bikini-clad friend S had a couple of truly blissful mornings in the spa.

We had one session of a sauna, steam and Vitamin C facial, and another of a full body treatment including exfoliation (S declined the offer of her tits being done; I said my therapist could polish up the big one but leave the little scarred one alone, ta), body wrap, herbal bubble bath (with a shoulder massage and a drink by our side – we were both feeling a bit smug at this point) and then a massage. Mine was a hot stone massage, which involved being drizzled with hot oil and then hot pebbles being used to rub away every ounce of tension. I cannot tell you how relaxed we were afterwards – we could barely speak.

The children were AMAZING from start to finish. You never know how planes, travelling and being out of routine are going to go with little ones – it could have been a disaster, and we’ve had a couple of crap journeys before. But they were all brilliant in both directions, and very quickly settled into a routine of siestas and eating late with us in the evenings, either a BBQ at the villa (with Spanish Mystery Meats) or in one of the resort’s many eateries. They played really nicely together all week, and our family afternoons splashing in the pool with armbands, boats and lilos were really fun, happy hours. The girls’ swimming lessons paid off with lots of confidence and I was so proud to see DD earnestly padding her way across the pool with her woggle under her arms. DS made endless requests for a ‘drink and a snaaaaack’, usually in the form of those lovely biscuits you only get on holiday that are like two rich teas with choccy in the middle. Nom nom nom. 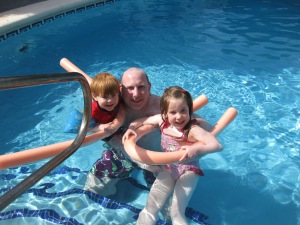 Me and S were pleasantly surprised how much downtime we got – there were periods when all the children were asleep in the afternoon when the grown-ups could ACTUALLY SUNBATHE AND READ by the pool (I got through When God Was a Rabbit, Michael McIntyre’s Life and Laughing, and halfway through Caitlin Moran’s brillantly funny How to Be a Woman). Can you imagine such a thing? As a mummy who is always always rushing round and juggling kiddies and work and domestic stuff, and always on a deadline, this was beyond luxe, frankly, and made it a far more relaxing holiday than I dared to expect. We even managed some eyeing up of the ripped pool guy (which led to J declaring his wife was a ‘visual slag’). And the whole mastectomy swimsuit/dressing-up-booby thing was fine, honestly, you would never know it was Tits v1.5 software under there.

I had treated myself to a few new dresses, mainly from Phase Eight, mainly in VERY bright colours, and spent the entire week in flip flops, apart from Date Night. Both couples had a night out with the other two babysitting, which we spent in the restaurant and the piano bar of La Manga’s hotel. I wore my astonishingly high new tan wedges, which I fell off, Naomi Campbell-stylee, on several occasions, firstly slipping on a wet floor on my entrance to the restaurant (pride dented as much as knee, obvs) and then on the walk home, which was entirely the fault of the three margaritas I drank while we played rummy and watched the sharking action in the piano bar. Crowds of golfers in their 30s, 40s and 50s who may or may not have been married were eyeing up the very slim pickings of girls in the bar. Tres funny.

I’ve even come back with as much of a tan as I ever get – I’m now a pale biscuity colour and my freckles are starting to join up. I look pretty healthy, actually, although my hair is a dry, frizzy mess and I long to have my long, shiny locks back.

But all good things must come to an end. I was surprised to find myself in tears as we drove out of the resort and headed back to Alicante (incidental note to everyone: NEVER follow me and DH into a strange foreign city. We WILL fail to navigate the one way system, get lost, panic and have a row).

When we booked the holiday, in February, I was only halfway through my chemo and S and J’s DS was just getting over his latest op. It seemed like a long way away for all of us, something to look forward to and keep us going, but I think we all felt there was a possibility we might not actually get there. It seemed like a bit of a dream after such a long, shitty time for both families. And then we were there, in the hot, blinding, Spanish light at the end of the tunnel, and it was really, really special. A week of newly minted, happy memories to replace the nightmarish quality of the past many months.

I usually love getting back to home sweet home after a holiday, but this time it was a shade less great being back in our cosy house, in our own beds. Because after a week of heaven, I have come back to Earth with a bump. It’s not just post-holiday blues. In about an hour, I will be having my first of 20 radiotherapy sessions, every week day for four weeks. DH is coming with me for the first one, because although I am sure it will be fine, I am scared, and resistant, and tired after two sleepless nights, and fed up of this caaancer-fucking, and just want my sodding life back.

I just have to remind myself that being zapped will give me a far greater likelihood of many more fun family holidays. And I need something else to look forward to. Roll on Disneyland Paris on 2 August… I’ll let you know how the radio ga ga goes.