I’ve been meaning to write this post for months. I was finally goaded into action by a bit of half-arsed ‘investigation’ into using food as medicine on Channel 4’s ‘The Food Hospital’ last night. After lots of basic, sensible stuff on how changing your diet can dramatically improve your health if you have diabetes, polycystic ovaries, high cholesterol or migraines, there was a five minute segment on a young woman who had breast cancer.

It had already spread to her spine. That’s not good news: with secondary cancer you can never officially be ‘cured’. So she had done her research and come across a hypothesis that replacing dairy with soya would have a huge impact on preventing hormone-dependent breast cancer (which accounts for around 50% of breast cancers: this is what I’ve had, and it’s more aggressive but there are more tools in the bag to tackle it at the moment.) I am very familiar with this theory, because the book it’s espoused in, Your Life In Your Hands, is practically my bible. 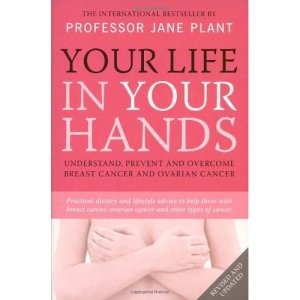 It was written by an earth scientist called Jane Plant, whose breast cancer kept coming back, tumours popping up all over the place. The fourth time, she was given months to live, and says she felt like giving up. But she didn’t. Instead, she used her scientific background to examine research papers from all over the world. She discovered that while in the UK, one in  ten (I think this is now one in eight) women will contract breast cancer, in China it’s more like one in 10,000. As she looked into this startling discrepancy, Jane Plant became convinced she had discovered the first causal link between diet and breast cancer.

Her story, and the book’s premise that the hormones in dairy produce can cause hormone-related cancers such as breast, ovarian and prostate – is compelling. After her last bout of cancer, she was given only months to live. Nearly 20 years later, she’s still alive and kicking, and the cancer is still in remission. Jane Plant suggests that the only living beings that need and can properly digest and process cow, goat or sheep milk are baby cows, goats and sheep. She intriguingly repositions dairy from ‘healthy and natural’ to ‘poisonous junk food’. There’s a bit of conspiracy theory involving two baddies – Big Pharma and the Global Dairy Industry – but I don’t have a massive problem with that.

The book so resonated with me when I read it just before my surgery in April (having being urged to read it by two different people on the same day – I’m a big one for following little signs from the universe like that), that I immediately cleared the fridge out of all dairy products.

This was A Big Deal because I’ve had a major love affair with cheese my whole life. In restaurants, I always went for the cheeseboard over a pudding. Cheddar, parmesan, brie and Boursin were staple foods in our house. Fondue? Nom nom nom. Not to mention milk, proper butter, premium yoghurts, custard, and ice-cream. I tried to buy organic – the non-organic dairy industry is as horrific as battery-farmed chickens – but otherwise had never thought twice about dairy other than the potential impact on my hips. Dairy’s good for you, right? And a great way of getting protein into children, yes? Well, perhaps not.

Cutting out dairy was easier than you might think. For me, the book opened my eyes to seeing my diet in a whole new way. It was a no-brainer: if there is even the slightest chance that Jane Plant is right, then why wouldn’t I switch from dairy to soy? We now have Alpro soya milk, yoghurt, and desserts instead of dairy, and dairy-free spread. I don’t exactly love tofu but I do use it. I drink miso soup. I snack on those lovely dried soya nuts and use soya beans (also known as edamame thanks to Wagamama). I love cooking and haven’t found avoiding dairy is even slightly tricky.

After a few months of being strict with everyone in the house, I am now confident enough that I can resist dairy to let the kids have the odd bit of grated cheese or Babybel, and DH to have butter and proper milk in his weekend coffee (soya milk is great in tea and on cereal but curdles revoltingly in homemade cwaffee. Not sure how the coffee shop chains manage it, but I do love my flat white with soya as a weekend treat). And I do have the occasional sliver of sheep’s cheese (Manchego, Pecorino, or Roquefort), since that seems less problematic, hormone-wise. But actually, much to my surprise, I just don’t really like the taste anymore. You know the thing that Chinese people say about Westerners, that we smell of rancid milk? That’s pretty much what all dairy smells and tastes like to me, now. All cow’s milk, no matter how fresh, just smells ‘off’. I don’t think the odd bit of dairy is going to hurt, but broadly speaking, it no longer has a role in my diet.

The kids are completely cool with the new regime. DS, in particular, has benefitted: I always suspected he was dairy intolerant because he was such a collicky baby, especially on my dairy-fuelled breast milk, and his nappies were ‘leave-the-room-retching’ vile. Since the switch, his tummy is absolutely fine, and nursery have been good enough to keep him off dairy as much as possible too.

So why did that Channel 4 show get my back up? The ‘nutritional experts’ briskly waved aside the young woman’s decision to swap dairy for soya as ‘controversial’ and said it was ‘up to her, but they haven’t found any evidence to support it’. Whoever ‘they’ are. The programme also then made some sweeping generalisations about avoiding all cancers, not just hormone-dependent breast cancer, including not drinking to excess, not smoking, and eating plenty of fresh fruit and veg.

Firstly, no causal link (ie x causes y) has ever been discovered apart from smoking and lung cancer. There is no definite link between smoking and any sort of breast cancer, although of course cigarettes do contain about a million carcinogens so it’s not a great idea. The evidence on alcohol is conflicting, and personally I think the benefits of relaxing with a glass of red after a stressful day outweigh any unproven risks, especially if we recognise the extent to which stress affects our immune system, which fights off the cancer cells we all have in our bodies. Plus wine is my only vice, so the nay-sayers can f*ck off.

Thirdly, cancer apparently loves sugar, and most fruit is very high in sugar. Fruit juice is practically all natural sugar with very little nutritional benefit. Yes, we get vitamins and fibre from fruit, but personally I aim for five portions of fresh, colourful veg and legumes or pulses a day, and avoid fruit (and, obviously, other sugary) apart from the occasional treat. I’m not alone – I’ve heard a few rumblings lately about the ‘five a day’ thing being flawed, because we really don’t need five portions of fruit a day, which is the easiest way of following this rule, especially for kids.

So there we are. I’ve fessed up. I don’t watch Martine McCutcheon in those Activia ads and think, ooh, I have to have a yoggy. I can’t say I don’t sometimes hanker over a very ripe, stinky brie ooching across a cheeseboard. But if you were in my position, I bet you’d give dairy a second thought.