In which Pinchy swims for bloody hours

I don’t know why it’s taken me so long to blog about this. I’ll probably work it out while I’m writing. Last month, I did my Biggest Ever physical challenge: I swam 5K for Sport Relief. Yes, I know! Me! The doyenne of exercise-avoidance!

Five kilometres, I can tell you, is a bloody long way. It is, in fact, 200 (count ’em) lengths of the Surrey Sports Park pool. It seems even longer when you can only do a ‘majestic’ (ahem) breast stroke and have never done more than happily bob around a holiday swimming pool for 40 years prior to taking on this challenge.

I’m being slightly disingenuous, of course: I didn’t just get in the pool on the day and hope for the best. I had been training for it since September, along with my two co-swimmers, my dear friend S and her oldest buddy A. Well, when I say training, it was more like swimming up and down for a bit twice a week, and then going for a natter, a cuppa and a panini because we were ‘famished’. At first, anyway. We were all comfortably swimming a mile – 64 lengths – by November, although that was taking me an hour. And then I sort of… stalled. I didn’t really get in the pool much during December and January. Or February. I started to seriously think about pulling out of the swim. I hadn’t started fundraising and was overwhelmed by the sheer size of the task for a non-swimmer.

Come to think of it, I was overwhelmed by much over the winter. It’s true that you only realise when you emerge from a tunnel how dark and cold it was in there, and how long it has been since you felt the warm sun on your face. Sitting here now, feeling broadly OK, I can’t quite believe what a struggle those wet, overcast months were, in all ways. It was probably a combination of seasonal glumness, a stressful time re finances, my natural tendency towards depression, and big bad life-changing stuff going on for friends who I love fiercely. Plus I was working almost every evening to meet deadlines and very involved with our school campaign after our head teacher left suddenly. (See my previous five posts for the full story!)

This period of General Rubbishness, pre-swim, was topped off nicely by a week in Egypt. Our first family holiday abroad for three years, and the first since I finished my cancer treatment. We took the kids out of school for a week and could still only afford it by hiving off a bit of the money we’d borrowed for a basic refurb of our decrepit kitchen, combined with DH’s first bonus for a few years. In other words, we were quite desperate for a holiday. The kiddies were looking forward to it so hard I thought they would burst before we hit Sharm. We were going to have an amazing time!

There is a small but important life lesson here about ‘non-attachment to outcomes’: the more you want things to be a certain way, the less likely they are to meet your expectations.  I’m always quoting Alain de Botton on travel – something very true he once said along the lines of ‘the trouble with holidays is that you take yourself with you’. The trouble with Egypt was that I took my tearful, short-fused, exhausted self there and expected to be transformed instantly by the sunshine, sea views and all-inclusive package  into the easy-going, cheerful version of myself. What actually happened was that I sat on the lounger with cause-less tears running behind my shades while our delightful and beautiful children had an amazing week in the pool. My Kindle died, both our phones were stolen from our hotel room, necessitating far too much interaction for DH with hotel security and management, reps, and Egyptian police stations, plus there was the worst torrential rainstorm Sharm had seen for decades. My energy was in such a shit place, frankly, it wouldn’t surprise me in the slightest if I manifested all of the above, like a frickin’ witch.

I was planning to swim loads while we were there. I didn’t. I did snorkel on a coral reef with beautiful fish, like Actual Finding Nemo, though, and that lifted my spirits a little. When we returned, it was only a fortnight to the Big Swim and I had only covered less than a third of the distance in my training sessions. So I went Forrest Gump. I got in the pool and just swam, for 80 lengths. Then a couple of days later I swam 100. Then 120. And finally, on the Monday before Sport Relief Swimathon Saturday, I ringfenced three hours and swam 180 lengths. At that point, and not at any point before, I knew I could do it. S mentioned that last year’s Swimathon times were on the website. I made the mistake of looking and realised that I really was going to be one of the slowest in the entire country – no-one in my age group had done 5k nearly as slowly as my predicted time of 3hrs 20 minutes. The only women who had done that sort of time were (I kid you not) called things like Doris and Ethel, which I pejoratively assumed meant that I was as slow as a Very Old Lady.

That week, as I wondered again why I was doing this, the Sport Relief programme about Davina McCall’s far more crazy challenge to cycle, run and swim 500 miles from Edinburgh to London, was on telly. The documentary followed Davina on her trip to Africa before taking on the challenge. As she sat with the little girl whose days consisted not of school and games and fun with friends but the monotony of breaking rocks and breathing dust with her mother, hour after hour after hour, for pennies, I cried. I realised that the money I had already raised at that point would send two little girls like her to school for a year. THAT was the point. And I cried again the next morning when I tried to explain to DD when she asked why I was swimming so far. There was my motivation. To give little girls, just like my bright and funny and precious seven year old daughter, a chance at a better life.

Nevertheless, I still had to do the damn thing. I didn’t sleep the night before the swim. I woke up in a terrible mood, really jittery and anxious. S had an upset tummy and A had her back strapped up. It was not looking good. The worst thing was waiting all day: the event wasn’t due to start until 6pm after the  start time moved from 5pm. I went slightly ballistic, and pointed out to the organiser that this would mean I would be in the pool until nearly 9.30pm, meaning my children couldn’t be there at the finish line and our plans for a takeaway and champagne with my M&D, who were up for the weekend to cheer me on, would be buggered. After she realised quite how slow I was (and that she’d probably need to give me the keys to lock up…) she asked if I’d like to start an hour early, in my own special lane. Like a special person. FFS. My sister texted, accurately: ‘We are not a family of athletes, Pinch’. I graciously accepted, of course.

So we arrived at the pool. DD and DS had secretly made me a poster saying ‘Go Mummy Go!’ I got into my cossie. Put my goggles on. Still shaking. My lovely friend B arrived en route to her date night just to see me off. Good luck countdown texts arrived from other dear friends. Team Pinchy was cheering on the sidelines. I got into the water, put my bottles of sporty drink stuff raided from DH’s cycling larder on the edge, and started. I was not entirely in a lane of my own – there was also a small child, who swam the entire 200 lengths in less than two hours, and a series of elderly gentlemen doing the 5k as a relay, who also finished well ahead of me. It took me a good 40 lengths to get into any sort of stride. If one can be shaking while ploughing up and down a pool, that was I. I stopped briefly every 20 lengths for a quick gulp of drink, and to check in with the very patient lady counting for me. Every length took one minute, for the first couple of hours. Then, as everyone else in my lane finished and I had it to myself, I actually got quicker. I was coming in under target! 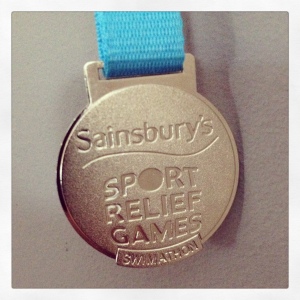 My family and S’s arrived to cheer us all on for the finish. The last 20 lengths were punishing: I was breaking new ground, and by that time my right arm was very painful. It’s the one that I had all the lymph nodes removed from; my movement is slightly limited on that side and it does get very uncomfortable at the top and in the armpit if I overdo it, risking lymphodoema and cellulitis ( I’ve only had this once, and it was royally crap).

Then, suddenly, it was the two hundredth length. My darling husband and babies stood at the end of the pool shouting ‘COME ON PINCHY!’, and I was trying to swim 25 metres while doing an odd mixture of sobbing and laughing. And then it was over. My official time was 3hrs 8mins. I’ve just checked and I was the 3,680th person to finish in the country. Whoop! Because I had started an hour early, I was actually out of the pool a few minutes before my much speedier swimming buddies, and was able to cheer them on at the finish. We had done it! Between the three of us we’ve raised a couple of grand so far, I think – you can still donate on my page at https://my.sportrelief.com/sponsor/majapawinskasims – I’m a few quid shy of £700 so all donations very welcome!

There was elation and achiness and lots of hugs. And we all got a medal, much to the smalls’ delight. Then champagne and a massive fat well-deserved Thai takeaway at home, followed by a bath in oil provided in my lovely school mum friend E’s ‘survival pack’ (along with bananas and jelly babies).

I woke up the next morning, terribly glad it was all over (although slightly surprised I had not turned into a size 6 sylph overnight). And at that moment, I began to feel better. Lighter and brighter. I had a health kinesiology session with my very dear friend Magic Emily, which helped shift things further and sorted out the achy lymph-free arm. And I have felt a little bit more myself every day since. I haven’t completely shaken off the Gloom, but I’m getting there. And that’s prolly why it took me so long to blog.

I’m never, ever swimming 5K again. But I quite fancy a different sort of physical fundraising challenge. I’m thinking trekking Peru for Breast Cancer Care next. Machu Picchu, anyone?