Turn and face the strange

This week, we lost Ziggy Stardust and Severus Snape, both aged 69, to the ravages of cancer. It’s no age, really, is it?

I have been quite surprised at my own distress at both deaths. I was just a twinkle in my daddy’s eye when *that* Starman moment aired on Top of the Pops in 1972, after all. I can’t claim that David Bowie changed my life, as he did for so many others. I just thought he was an awesomely cool creative force (even if my favourite Bowie song is the super-cheesy Absolute Beginners). But I still cried.

As for Alan Rickman, he was in some of my very favourite movies. My first year at uni was more or less back-to-back viewings of Truly Madly Deeply. Plus he was Professor Snape, for goodness’ sake.

And you just feel that bit chillier when a star has gone out, even if it wasn’t shining directly on you.

There’s another obvious thing, of course. An awful lot of people die from some form of cancer every day. Those rogue cells are complete and utter bastards. And every time there is a high profile death from cancer, I do some kind of quasi-non-Catholic-sign-of-the-cross thing in my head.

There, but for the grace of the universe, go I.

During this very sad week for creativity and movies and music, though, I have been doing this mental manoeuvre without the added acrobatics of crossed fingers, because on November 5th 2015, I got my official five year sign off.

This was very much a WHOOP WHOOP! moment.

My oncology team are no longer interested in me. I don’t have breast cancer anymore.

There’s no such thing as being “cured”, of course, and disclaimers abound: there are no guarantees that there won’t be a repeat performance at some point in the future.

But my prospects are excellent: I’ve had amazing, pioneering surgery, a super-powerful chemo drugs trial, belt-and-braces radiotherapy, and I’ve got another five years of daily Tamoxifen tablets as an insurance policy. I also get annual mammograms until I’m 50, and an annual chat and check-up with the breast clinic. It’s all good.

I felt, yet again, like the luckiest girl in the whole world when the consultant stood and smiled and shook both our hands and said: “Well done. You did it”. Me and DH cried outside the hospital, with relief and happiness. It really did feel like we could exhale after holding our breath for five years.

Serendipitously, it was Fireworks Night, so obviously we had a handful of family members and close friends and excitable small people over for low-key sausages and fireworks and champagne. It was awesome to be able to say, out loud, that, as promised, I have well and truly fucked cancer. Pretty emotional, all round.

Life was good. We could all chill out and move on.

Because on the seventh day after my victorious sign off, DH got made redundant.

I felt like we were bloody Katniss and Peeta in The Hunger Games. We’d just wiped out one deadly opponent when another poisoned arrow came hurtling out of the woods towards us.

My mum said, sagely, that you expect things to calm down by your 40s, but actually it often ends up being the most life-changing decade. It’s true that almost everyone I know is going through, or has gone through, some sort of Major Thing in the past couple of years: separation, divorce, serious illness, parental illness, bereavement, redundancy, financial stress.

Your 40s, in other words, are when you have to finally, properly, grow up. We are the adults now. The shit is happening to us and no-one else is going to make it all better or write a sick note excusing us from responsibility. That’s pretty scary.

DH had had a crap year at work, to be fair. After nine years doing extremely well in the same company, there’s nothing quite like being wrong-footed by your new boss at every turn, so your confidence is utterly destroyed. If he were a different man, he might have seen the eventual departmental reorganisation and redundancy as a blessing.

It was nothing personal, but my boy took it deeply personally. He has always worked hard, and cares very much about doing the best job he can. He’s all about achievement, and problem-solving, and efficient processes and spreadsheets and excellent relationships with clients and colleagues.

He’s also got the risk profile of a 70-year-old, according to our IFA: security, stability, salary, savings are his watchwords. My frivolous spending habits (“Ooh! Look! I must get that resin cockatoo for the mantelpiece!) and freelance life drive him potty.

Redundancy was literally his worst nightmare. In the days after he was given the shocking news, I could see he was imagining, somehow, that being made redundant would inevitably lead to losing the house, me, and the kids, until he was destitute and homeless.

How to support someone you love, who has got into that state? I was still out of breath from completing my own long, dark marathon of the soul. I had to put something of a shield up, to protect myself and not get dragged into the slough of despond. No use two of us crumbling under the pressure. I could definitely have given him more cuddles and sympathy, but at the time my gut instinct was that there was nothing to be gained by indulging the catastrophising.

Instead, I automatically went into Coach Mode, and encouraged him to Take Massive Action. It’s the only way of regaining some sort of control when all seems lost, really, isn’t it?

Reach out. Zsush up that CV and LinkedIn profile. Email and call everyone who might have a job, or might know someone who did. Take people for coffee. Arrange meetings. Go to every interview. Keep an open mind.

Above all, do whatever you need to do to keep your head in the right place, darling. Accept all offers of professional, moral, medical and therapeutic support.

As with all of life’s big landmarks and crises, one finds out who one’s friends are. The lawyer and the headhunter truly stepped up, using their skills and love to support and advise, on a daily basis, sometimes for hours on end. Many others chivvied and cheered and were generally in touch and checking in. And DH was truly humbled by the number of colleagues and contacts who were as shocked as he was, and said lovely things about him.

Of course, when you take massive action, good things cannot help but happen eventually. And so it was that just five weeks later, on the very last day of term, just as he was breaking up for Christmas before being redundant on 31 December, DH was sent a contract for a very exciting new job Up That London.

He was never out of work for one second, after all. And I could not be prouder of him.

Two weeks in, and he’s loving it. Great, interesting people who have made him feel very welcome and can’t do enough to help. A boss who already knew and liked and respected him. A huge and stimulating challenge. Lovely jubbly.

So we started the New Year with me being officially healthy for the first time since 2010, with a job I love, and DH enjoying a proper silver lining in his career. Our quite extraordinary small people (DD is nearly nine-and-a-half and DS is nearly seven-and-a-half) have settled beautifully into their new school, where we moved them at half term, after all that nonsense with the last place.

There’s no way of knowing what 2016 will bring for us. But as Baz Luhrmann once wisely said: “Don’t worry about the future. Or worry, but know that worrying is as effective as trying to solve an algebra equation by chewing bubble gum. The real troubles in your life are apt to be things that never crossed your worried mind. The kind that blindsides you at 4 pm on some idle Tuesday.” True dat.

And, appropriately, in the words of the visionary Starman: “I don’t know where I’m going from here, but I promise it won’t be boring”.

PS – I wasn’t kidding about the cockatoo… 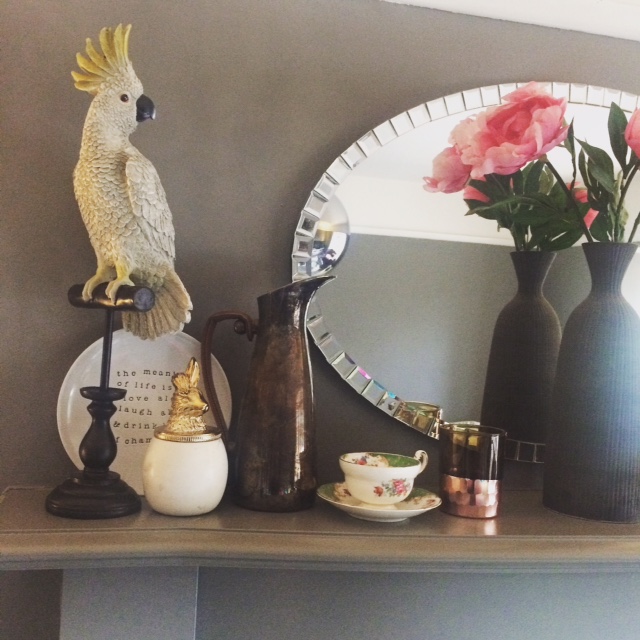